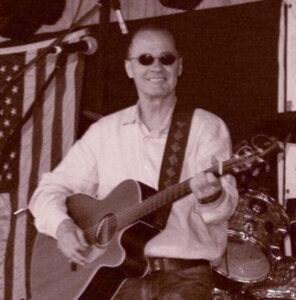 Peter McKiernan, known affectionately as “Mr. Catskills” sadly passed away on September 29, 2020 after a 16 month battle with cancer. We are deeply saddened by his passing. There will never be another Mr. Catskills and we can’t imagine life without him. It was such an honor to know him and to love him. A light has gone out in East Durham, never to be lit again but we can do our best to honor him with an Arts Week Scholarship and a permanent memorial on the Cultural Centre grounds. Please consider making a donation in his name so we can fund this scholarship and permanent memorial.

Peter started his musical journey in the Catskills after spending the summers of his youth here visiting from Brooklyn with his parents, June and Hugh, and his older brother Michael. By the time Peter was 19 years of age he knew he wanted to spend his life singing, playing guitar and dancing…and doing as much of it as possible in East Durham which was the place that held his heart and soul. Throughout the years, Peter played at every resort and pub in East Durham finishing the last nearly 20 years in residence at The Blackthorne. Throughout his more than 5 decades performing in East Durham, he epitomized the hospitality that the Irish are known for and greeted everyone with a huge smile, warm greeting and made everyone feel welcome and at home in the Catskills. He was known for his wit and one liners and was well known for his generosity in getting up fellow musicians and people from the audience to join in the fun. In particular, Peter loved encouraging children to sing, dance and play and gave many children and youth their first experience on stage. Peter especially loved our Irish Arts Week held every July when crowds of people from stateside and abroad immerse themselves in all aspects of Irish culture from early morning until the wee hours. As Peter would say about all things East Durham and especially Arts Week, “How great is this?!”. We know he would be honored to think we will be keeping his memory alive with a permanent memorial at the Cultural Centre in the town he loved so well and which loved him so much in return and we know he’d love that a Scholarship is being funded in his name so that both children and adults, each year, will get to enjoy East Durham during one of its most memorable weeks.

Peter McKiernan truly gave to everyone. Anyone who knew him knew that he was the first to offer to play for free at any fundraiser event. He also generously donated his time and talent to his many friends’ events refusing to take money and sang and played at baptisms, communions, confirmations, graduations, birthdays, cocktail hours, anniversaries, weddings both in church and at the reception and although sad for him, he played and sang at many, many funerals (although he was never happy about the early hour for church events saying these morning events went against musician’s hours!). Peter loved his friends and in addition to his beloved parents June and Hugh (RIP), his brother Michael (RIP), and much loved niece Kelly Ann and adored grandniece Kennedy, he considered his friends his family and treated them as such. He loved seeing children grow up and become friends of his and then seeing them get married and start families of their own and being given the honor of playing at all of their respective family occasions. Peter used to joke that he was now playing for the 2nd generation and he hoped to live long enough to play for a 3rd generation. Sadly that was not meant to be. It is now our chance to give back to Mr. Catskills, a man who never said no to anyone and always did whatever he could to make it happen. Please help us to honor Peter by making a donation to the Arts Week Scholarship and/or the permanent Mr. Catskills Memorial on the Cultural Centre grounds.

Rest in peace Mr. Catskills. You have earned your wings. We were all so blessed to have had you in our lives. There will never be another you.

Click the button below to donate via Paypal or see above for information if you’d prefer to send a check.

View our Peter McKiernan slideshow below.